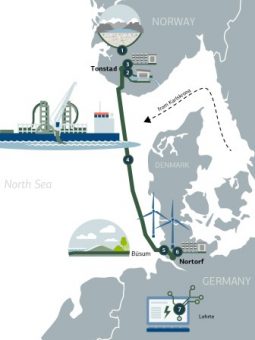 The NordLink cable will directly connect the German and Norwegian energy markets for the first time. Electricity from wind and hydropower will be exchanged to ensure supply reliability, stable prices and a higher share of renewables in the energy mix. KfW Stories reports on the technologically unique project.

At an elevation of around 900 metres, the Svartevatn dam in southern Norway‘s granite massif holds back vast amounts of water. At first glance, the 1.4 billion cubic metres of water look peaceful and smooth behind the spectacular structure, which contains more stones than the Great Pyramid of Giza in Egypt so they say. Upon closer inspection however, you can see a maelstrom at a spot near the edge where water plummets downward. It is the starting point of a cascade that is over 75 kilometres long and drops 850 metres down through subterranean pipelines connected to reservoirs.

This network leads to Sira-Kvina’s Tonstad power plant. The plant was carved into the stone at the end of the 1960s and equipped with four turbines. It has the highest hydropower output in all of Norway with 3.9 billion kilowatt hours. Green electricity produced here will soon also flow into the German power grid.

On a high plateau a few hundred meters above the Tonstad hydropower plant, a new substation has been constructed to facilitate transport of a formidable 1,400 megawatts – this can supply 3.6 million households – through the sea to Wilstermarsch in northern Germany. It is part of one of Europe’s most important electricity hubs. Hydropower from this region has already been sent to England, Denmark or the Netherlands for years. In spring 2021, the largest power cable to date will be completed: NordLink.

KfW, represented by KfW IPEX-Bank, has become a co-investor to finance this approximately two-billion-euro Herculean project that will enable Norway to send hydropower to Germany and Germany wind power to Norway. NordLink was initiated around ten years ago. “At that time we had a really critical situation here in Norway,” says Stein Håvard Auno, Project Director for NordLink at Statnett, the system operator of the Norwegian power system. “We had hardly any rain fall in the fall, and the reservoirs were nearly empty in the winter. We needed to import electricity, which caused the energy prices to rise. In that way NordLink is important to Norway’s energy security in dry years. It will also help us keep our electricity prices more stable even during dry seasons. NordLink will contribute to a more sustainable energy mix. In this way we are making an important contribution to the energy transition in Europe.” 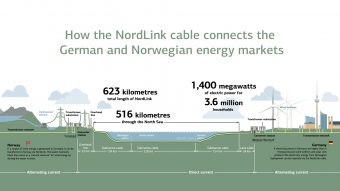 Supply security, stable prices, a faster energy transition – this triad also applies at the other end of the 623-kilometre-long double cable made of positively and negatively poled cables. The counterpart to the substation in Tonstad is in Schleswig-Holstein in the town of Nortorf near Wilster. Converters manufactured by ABB, which convert the alternating current obtained into low-loss direct current for transporting it through the cable and change it back into alternating current at the end, are at the heart of the two substations which count among the most powerful substations in the world.

They convert the generated alternating current into low-loss direct current for transport via the cable, which is then converted back to alternating current again at the other end. Around three metres above the ground of the converter facility, the silver valves hang on steel cables like precious shrines. They contain the newest generation of a technology that experts call VSC-HVDC: high-voltage direct current power transmission in self-commuted power converters.