The race to create a genuine artificial leaf has heated up to the boiling point. The latest development is a new device that looks like a greenish tile the size of a stick of gum, but actually contains billions — yes, billions — of nanoscale tubes that react to light and convert carbon dioxide to carbon monoxide. So what, you say? Good question! The carbon monoxide is a first step toward the ultimate goal of producing methanol. Hmmm…why methanol? 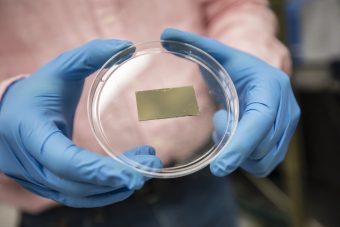 Why solar fuel? Why methanol?

So many questions! Let’s turn to our friends over at the US Department of Energy Alternative Fuels Data Center for an answer:

Methanol (CH3OH), also known as wood alcohol, is considered an alternative fuel under the Energy Policy Act of 1992. As an engine fuel, methanol has chemical and physical fuel properties similar to ethanol. Methanol use in vehicles has declined dramatically since the early 1990s, and automakers no longer manufacture methanol vehicles in the United States.

That doesn’t sound too promising, but methanol is commonly produced by steam-reforming natural gas. If you were going to make a methanol vehicle for the sparkling green future, then you would want to use a renewable source for your fuel.

For that matter, the original source of methanol is wood, as in wood alcohol. Methanol can also be produced from other carbon-based renewable materials.

The Energy Department is interested in methanol because it is less expensive and less flammable than gasoline, and it can supplement the domestic fuel pipeline, but since nobody is making methanol cars any more that’s kind of a moot point.

On the other hand, methanol has a plethora of other uses in the chemical industry. The wastewater treatment industry also favors methanol for removing excess nutrients from municipal effluent.

Since there is already an extensive, existing infrastructure for methanol and similar liquids, then why not replace fossil methanol with renewable methanol. You never know, maybe the methanol vehicle will make a comeback. 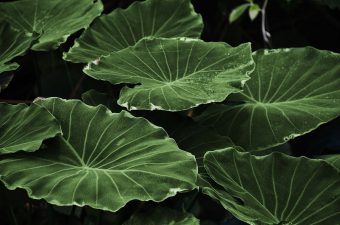 Where were we? Oh right, billions of nanoscale tubes that generate solar fuel. The new artificial leaf was created by a research team based at the Energy Department’s Lawrence Berkeley Laboratory.

The new design resolves one key challenge that has been a “thorn in the side” of the solar fuel club, which is how to speed up the flow of protons.

Each nanoscale tube contains a layer of silica embedded with short hydrocarbon chains, which Berkeley Lab describes as “molecular wires.” The wires connect to cobalt oxide inside the tube, and to a silica-titanium dioxide boundary on the outside.

Here’s the explainer from the lab:

In the inner layer of the tube, energy from sunlight delivered to the cobalt oxide splits water (in the form of moist air that flows through the inside of each tube), producing free protons and oxygen.

These protons easily flow through to the outer layer, where they combine with carbon dioxide to form carbon monoxide now – and methanol in a future step – in a process enabled by a catalyst supported by the titanium dioxide layer.

There’s a lot more too it — for example, the new solar fuel system solves another key challenge, which is how to keep the reactions separate.

For all the details on the new solar fuel, look up the study “Ultrathin Amorphous Silica Membrane Enhances Proton Transfer across Solid‐to‐Solid Interfaces of Stacked Metal Oxide Nanolayers while Blocking Oxygen.“ 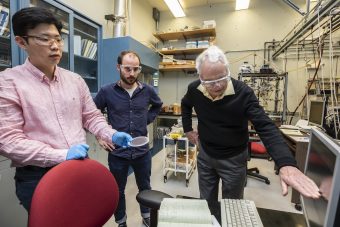 The Berkeley Lab research team makes it clear that they’re taking care of the science part. Scaling up the device and achieving commercial viability for solar fuel is a whole ‘nother can of worms.

That can go horribly wrong on the commercial side, but things have been popping on the research side. A few years back Clean Technica took note of some other developments in the artificial leaf field, including a “bionic” device that can churn out rubbing alcohol. More recently the solar-sourced fuel concept has broadened to cover renewable hydrogen.

Speaking of sunlight, there has been plenty of speculation rolling around the Intertubes as to whether or not sunlight kills the COVID-19 coronavirus. While others speculate on that, check out the US Centers for Disease Control guidelines for cleaning and disinfecting your home. Sunlight doesn’t make the cut but there are other steps you can take to reduce the risk of passing infection within a household.

The impact of warm weather on the virus is another matter of speculation. BBC.com recently published a good plain-language discussion of all the speculating involved on that score  — and why the only way to slow down the rate of infection, right now, is to separate yourself from other people. Please everyone out there, take care of yourselves.