The Honda e electric car is a perfect example of a car nobody in America wants. It is not faster than a speeding bullet. It cannot leap tall buildings in a single bound. It can’t haul a tandem horse trailer over the Eisenhower Pass. It doesn’t have room for an entire NBA team and it won’t outperform a Porsche 911. So, what good is it? 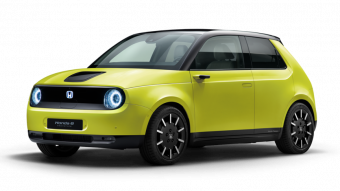 The people at Honda see things differently. Kohei Hitomi, head of the e Prototype project team, says, “If we look at the market at the moment, there is a trend where manufacturers are competing with each other with driving range. Consequently, batteries are getting bigger and heavier. From Honda’s perspective, this is counterproductive because that makes cars bigger and impractical for city usage. We believe a range of more than 200 km with charging up to 80 per cent in 30 minutes is practical for daily usage — not always carrying a huge and heavy battery around for maybe that one time at the end of the week where you have to drive long distance.”

And that’s why the Honda e won’t be coming to America. It has designed the car it thinks people need, not the car they want. Which is a shame. The Honda e is an efficient package that should be entertaining to drive given its light weight, 148 horsepower, 221 foot-pounds of torque, rear-wheel-drive configuration, and 50/50 weight distribution. It will come with a 35.5 liquid-cooled battery and a projected 200 km (124 mile) range. An 80% recharge in 30 minutes is also part of the package.

But only people in France, Germany, Norway, and the UK will get to enjoy all its goodness. Honda has no plans to sell the car in America, where people prefer to drive a turbodiesel quad cab pickup truck to work 50 weeks a year just so they can tow the ski boat up to the lake house in the summer. The idea that they could rent a truck for 2 weeks when they need it and drive a more efficient vehicle the rest of the year never would occur to them.

The Honda e bears a striking resemblance to the original Honda Civic that went into production in 1972. Back then, conventional wisdom said nobody wanted small, efficient cars. Many predicted Honda would soon go bankrupt. Oddly, we hear the same refrain all the time today when it comes to Tesla. Some people never learn.