There’s evidence that the mantra “reduce, reuse, recycle” has its origins with the Romans, Greeks or even in the Bronze Age. A circular economy is based on the principles of designing out waste and pollution, keeping products and materials in use, and regenerating natural systems, according to one of its key proponents, the Ellen MacArthur Foundation, which also says the idea isn’t new.

“The idea of feedback, of cycles in real-world systems, is ancient and has echoes in various schools of philosophy,” the Foundation says.

Here are three examples of how the ancient world embraced the circular economy:

Here are three examples of how the ancient world embraced the circular economy: 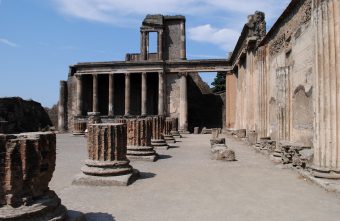 2. Sorting out the trash in Pompeii

The Romans also recycled, according to a report in the Guardian newspaper. Mounds of rubbish preserved after the eruption of Mount Vesuvius in 79 AD were “staging grounds for cycles of use and reuse,” says Professor Allison Emmerson, an American academic who works in Pompeii.

Archeologists working at the ancient city of Sagalassos, now part of Turkey, found glass chunks, fuel ash slag and kiln fragments, that indicate glass recycling, according to a paper in the Journal of Archaeological Science.

Even so, we should be careful not to overstate past populations’ commitment to recycling, argues Maikel Kuijpers, an assistant professor at the Max Planck Institute for the History of Science, on digital news site The Conversation.

“Our ancestors were no ecological saints,” he said. “They polluted their surroundings through mining, burned down entire forests, and they too created massive amounts of waste.”

And those themes are still relevant today.

A circular economy could result in as much as $4.5 trillion in economic benefits to 2030, according to the World Economic Forum. Just 8.6% of the world is currently circular, and the Forum’s work seeks to foster collaboration between private, public, civil society and expert stakeholders to accelerate the circular economy transition.

“The current system is no longer working for businesses, people or the environment,” the Ellen MacArthur Foundation says. “We must transform all the elements of the take-make-waste system: how we manage resources, how we make and use products, and what we do with the materials afterwards. Only then can we create a thriving economy that can benefit everyone within the limits of our planet.”