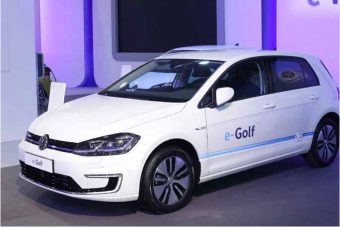 To catch up with rivals, Volkswagen plans to introduce more than 30 electric cars by 2025. It forecast sales of as many as 3 million of its battery-powered vehicles annually by then, the equivalent of as much as 25 percent of its global sales.

Volkswagen also plans to establish a mobility-solutions business that will develop its own services and acquire companies in areas such as ride-hailing, robo-taxis and car-sharing. The goal is to generate billions of euros in revenue from the efforts by 2025, the carmaker said. A $300 million investment last month in ride-hailing app Gett was Volkswagen’s first foothold in the burgeoning field.

To vie with Google’s efforts to develop self-driving vehicles, Volkswagen aims to create its own system for autonomous vehicles and license it to other companies by the end of the decade.

The new strategy may also include an expansion of Volkswagen’s truck operations into the U.S. The division, which owns the Europe-focused MAN and Scania brands but isn’t active in North America, is targeting a significant presence in “all key regions,” the company said.

Volkswagen plans to expand in these new areas while also seeking to rein in research and development spending. That calls for changes such as streamlining its component operations. The company is also negotiating with labor unions for as much as 8 billion euros in productivity gains, especially at Volkswagen’s namesake brand, the 12-brand group’s largest unit, which was struggling even before the emissions cheating hit its image.

By the end of this year, Volkswagen will present detailed steps to implement the plan, including financial targets for its units. On the group level, Volkswagen expects to raise its operating return on sales to between 7 percent and 8 percent by 2025, up from 6 percent before special items last year.