Europe’s carmakers are gearing up to make 2020 the year of the electric car, according to automotive analysts, with a wave of new models launching as the world’s biggest manufacturers scramble to lower the carbon dioxide emissions of their products. 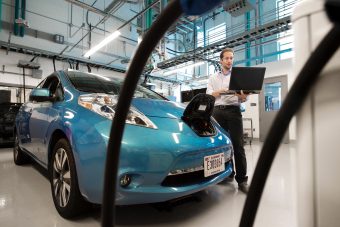 Previous electric models have mostly been targeted at niche markets, but 2020 will see the launch of flagship electric models with familiar names, such as the Mini, the Vauxhall Corsa and the Fiat 500.

The number of electric vehicle (EV) models available to European buyers will jump from fewer than 100 to 175 by the end of 2020, according to data firm IHS Markit. By 2025 there will be more than 330, based on an analysis of company announcements.

New European Union rules come into force on 1 January that will heavily penalise carmakers if average carbon dioxide emissions from the cars they sell rise above 95g per kilometre. If carmakers exceed that limit, they will have to pay a fine of €95 (£79) for every gram over the target, multiplied by the total number of cars they sell.

The excess emissions bill would have been £28.6bn on 2018 sales figures, according to analysis by the automotive consultancy Jato Dynamics, illustrating the extent of the change required by carmakers over a short period of time. Jato analyst Felipe Muñoz said there will still be large fines, as companies keep selling profitable internal combustion engine cars and struggle to bring down EV prices to parity with their fossil-fuel peers.

“It is very difficult for carmakers to change manufacturing infrastructure in such a short period of time,” Muñoz said.

However, some analysts take a more sceptical view of the industry that spawned the Dieselgate scandal, in which Volkswagen and Daimler were shown to have deliberately cheated emissions regulations. Carmakers successfully lobbied for a rule that means cars emitting less than 50g of carbon dioxide per kilometre are eligible for so-called super-credits, a controversial policy which means that every electric vehicle sold counts as two cars. That makes it easier for carmakers to meet their targets, even if average emissions from their cars are actually higher than the rules stipulate.

“A lot of action has been postponed until [the carmakers] need to,” said Julia Poliscanova, the clean vehicles director at the campaign group Transport & Environment. “What they’re planning to produce is more or less what they need to hit their CO2 targets.”

Multiple new electric car models will go on sale just in time to qualify for EU regulations. In November the first of Volkswagen’s ID.3 cars rolled off a new electric production line in Zwickau, eastern Germany, that will be able to produce 330,000 vehicles a year by 2021. The first of BMW’s Mini Electric models, made in Oxford, will arrive in showrooms in March. Vauxhall, owned by France’s PSA Group, will start production of its Corsa-e in January, with sales to begin in March.

Sales of pure electric vehicles will still be dwarfed by those of cars with conventional fossil-fuel engines, as well as hybrids that use both battery and internal combustion power. However, the electric vehicle surge is likely to contribute to significant price reductions, as carmakers compete for buyers beyond the early adopters willing to pay a premium.

Consultants at Deloitte estimate the market will reach a tipping point in 2022, when the cost of ownership of an electric car is on par with its internal combustion engine counterparts.