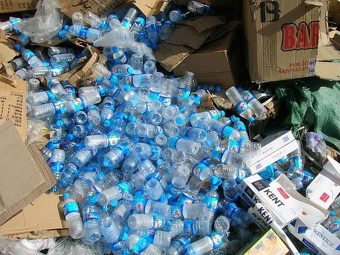 A number of countries in Europe (and elsewhere) currently employ plastic bottle deposit return programs — programs which essentially pay consumers to return their used plastic bottles to grocery stores where they are collected in exchange for cash back or store credit.

Owing to the success of such programs elsewhere, 2 supermarket chains in the UK — Iceland Foods, and The Co-op — have now publicly come out in support of the rollout of such a program in the UK. With the intent being to both increase recycling rates and also to reduce the amount of plastic litter making it into the oceans.

“Introducing a DRS may well add to our costs of doing business. However, we believe it is a small price to pay for the long term sustainability of this planet,” stated Richard Walker, the director of sustainability at Iceland Foods. “I urge all other retailers to do the right thing and follow suit.”

Notably, part of the UK, Scotland, has already publicly committed to the eventual launch of a deposit return scheme for plastic bottles.

Here’s more on the subject via Reuters: “The rest of the UK has yet to commit to such a scheme, although in April the government established a working group to formulate a national litter strategy and look at different voluntary and regulatory options to improve recycling.

“And finance minister Philip Hammond said the government will look into ways to reduce plastic waste through the tax system and charges on single-use plastic items during his budget speech to parliament in November.

“But such moves may face resistance from the plastic industry. The British Plastics Federation said deposit schemes may not be popular with consumers and could ‘undermine the existing kerbside system’ whereby waste bins are regularly collected from streets outside homes and businesses.”

A ridiculous argument, but presumably the plastics lobby does have some clout so it may well yet be able to do some damage to the campaign to establish a deposit return scheme.

With regard to a trial of such a scheme, the frozen foods chain Iceland Foods has reportedly offered to pilot the use of “reverse vending machines” — like those in use in some other countries.

“This cannot carry on. It is causing untold damage to our oceans and wildlife,” stated Iceland’s Walker. “It is a ticking time bomb for humanity, since we all ultimately depend on a healthy ocean environment for our own survival.”

If followed through with, such an initiative would follow on the UK’s 2015 decision to impose a 5 pence charge on plastic bags (previously given out freely at various stores). That move has reportedly already curtailed the distribution of some 9 billion plastic bags.