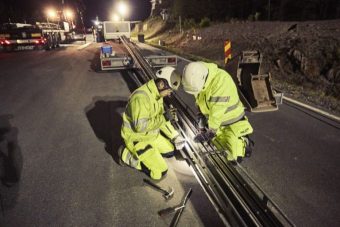 An “electrified road” that allows vehicles to charge en route has opened near Stockholm Airport in Sweden. It’s currently a 2 kilometer stretch along a high-traffic shipping route.

The constant flow of trucks shuttling containers and loads of cargo between the Stockholm Arlanda Airport and a nearby shipping hub made it an easy target for the pilot project. The effort, naturally, is part of Sweden’s efforts to slash consumption of imported fossil fuels used for transportation. Aside from climate and air quality concerns, this is part of a larger energy independence initiative.

The system uses 50 meter segments of fixed tracks of electrified rails that are physically installed into the road itself. Those are then energized when a vehicle is overhead looking to charge. Communications between the vehicle and the system monitor usage of the system. Thus, drivers or fleet managers can be billed for energy consumption.

Hans Säll, chief executive of the consortium managing the initial phase of the electrified road, believes the technology is also very safe: “There is no electricity on the surface. There are two tracks, just like an outlet in the wall. Five or six centimetres down is where the electricity is. But if you flood the road with salt water then we have found that the electricity level at the surface is just one volt. You could walk on it barefoot.”

Scrolling through the project timeline for eRoad Arlanda shows both the long history of electric vehicles and the rapid progress in the last 18 months, with new pilots and products evolving rapidly.

The electric charging road has grown in fits and starts, with the initial trial stretch of 200 meters installed in 2012 then adding tens and hundreds of meters at a time to reach its current length of nearly 2 kilometers of electrified roadway (the situation today).

The consortium running the pilot, eRoad Arlanda, has partnered with PostNord, the first company to use the new electrified roads. In an exciting twist, Hans Säll, chief executive of the eRoadArlanda consortium, shared that he believes that both current electric vehicles and existing roadways could be modified to use the new format if the standard is adopted.

Looking to the future, there is a lot of work to do in order to bring dynamic conductive electric vehicle charging to reality in Sweden or anywhere else. Säll shared that,“If we electrify 20,000km of highways that will definitely be be enough. The distance between two highways is never more than 45km and electric cars can already travel that distance without needing to be recharged. Some believe it would be enough to electrify 5,000km.”

The utopian future is easy to talk about, but what about the cost? At an estimated cost of just €1000 per kilometer, the system is surprisingly cost effective, making the system a compelling option for eliminating transportation emissions in favor of low-range electric vehicles.

Will Sweden commit to the technology to kick transportation emissions to the curb? Time will tell, but the results from the initial pilot so far paint a compelling picture. Looking forward, the next milestone is whether or not the market will support purchasing or converting vehicles to start making use of the existing track.