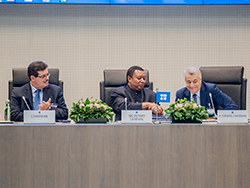 The OPEC High-level Committee, established by the Algiers Accord, met with non-OPEC oil producing countries on Saturday, 29 October, at OPEC headquarters in Vienna.  It was preceded by the first High-Level Committee Meeting, held Friday, 28 October, among OPEC Member Countries.

The Meeting acknowledged the landmark Algiers Accord, which was a consensus decision of all OPEC Member Countries, and underscored the positive impacts it has had on the markets, with a reversed trend in oil prices and reduced volatility, providing a common platform for all producers to work jointly on restoring stability to the markets.

Delegates also discussed current oil market conditions and prospects for the rest of the year and in 2017.  Deliberations focused on oil market fundamentals and driving factors for the economy, oil demand and supply, including the exceptionally high stock overhang.

The Meeting noted that the world economy, despite prevailing uncertainties, is expected to see improvements in the current year and in 2017.  There has already been an increase in oil demand growth so far in 2016 in both the OECD and other regions, with potential for similar growth in 2017.  On the supply side, significant declines were noted in non-OPEC regions in 2016. However, the stock overhang continues to be very high.

In addition, the negative impact of prolonged low oil prices, which has resulted in deep cuts in upstream investments, is expected to extend into an unprecedented third year.  Furthermore, despite gradual adjustment, persistent oversupply with excess stocks was noted as a concern, exerting adverse pressure in the market.

The Meeting engaged in intensive and fruitful deliberations on how best to return much-needed stability to the market. The participants shared their readiness to enhance the rebalancing process, including through joint coordinated actions implemented on a sustainable basis, in order to accelerate the ongoing drawdown of the stock overhang and bring the rebalancing forward.

In this regard, the Meeting emphasized the value of more frequent consultations towards contributing to the effective implementation of the Algiers Accord.

In view of the market complexities and large uncertainties going forward, the Meeting stressed the importance of enhanced cooperation for all times, along with technical interactions, so that future consultative meetings may adequately address topical issues affecting the oil market and the industry at large.

At the conclusion of the Meeting, participating countries expressed their appreciation for the constructive and fruitful discussions, and resolved to strengthen their cooperation through regular, structured and sustainable consultations among OPEC and non-OPEC producers in accordance with the mandate of the Algiers Accord. The consultations will continue in November 2016.

The Meeting marked positive development on the road towards reaching an agreement at the OPEC Ministerial Conference to be held on 30 November 2016.